This year, the British Association of International and Comparative Education (BAICE) annual conference was held at the University of York from the 12th– 14th September. Professor Michael Crossley delivered the Presidential Address titled Policy Transfer, Sustainable Development and the Contexts of Education. This report highlights Michael’s Address and summarises the other Bristol contributions to the conference.

It was fitting that Michael should be BAICE President in the year that the Association celebrated its 20th anniversary. Michael has been an active member of BAICE throughout its twenty years,  serving as Vice-Chair and Chair, and later creating its archive, an open online record of reports on projects and awards sponsored by BAICE, short discussion articles, and, of course, BAICE Presidential Addresses. Michael was the Editor of Comparative Education from 2003-2010, a world-leading journal in the field, and he continues to serve on the Editorial Board of that and other leading journals and was elected as a Fellow of the Academy of Social Sciences (FAcSS) for his contribution to the field. Michael was the founding and long-time Director of CIRE, including many years when it was known as the Research Centre for International and Comparative Studies (ICS), and he continues to support CIRE as Emeritus Professor.

The Presidential Address: Policy Transfer, Sustainable Development and the Contexts of Education

The voice of Aretha Franklin singing Sam Cooke’s American civil rights anthem, ‘A Change is Gonna Come’, announced the start of the Presidential Address. Her legendary voice evoked the 1960s and symbolized an emerging ‘disruptive and creative youth culture’. And so, Michael’s address began with an introduction to the cultural, local, and global milieu within which he, a young Yorkshire man, became a secondary school teacher and developed a practical and theoretical interest in comparative and international education. This led to a PhD from La Trobe University in Melbourne (an ethnographic study of policy transfer from the UK and Australia to a remote Southern  Highlands school in Papua New Guinea), a first academic post at the University of Papua New Guinea (PNG), and an extensive body of published work, inspired by early research in PNG, challenging the uncritical international transfer of educational policy and practice.

Michael’s address took us on a grand tour of international education policy transfer and ‘borrowing’ and its critique by comparativists. We started with a historical long view. The field of comparative education, since its origins in the early 19th century, has been influenced by a rich spectrum of changing theoretical and methodological approaches, with some practitioners favouring positivistic research, intended to furnish policy makers with ‘scientific’ evidence,  and others developing more theoretically-oriented, sociocultural analyses, with critical theory and postcolonial perspectives that foreground the contextually situated and contested nature of education policy and practice.  We quickly moved to a critical and theoretically informed interrogation of the contemporary era of ‘deterritorialised’ policy making (Steiner-Khamsi and Waldow 2012) enabled by global-scale international surveys and an influential network of consultants (Auld and Morris 2014). We were shown how big data and global league tables have become technologies of global governance and how international power differentials and inequalities often constrain the agency of local policy actors in aid-dependent nations (Crossley, 2014).

Sustainable development was a strand of Michael’s research before it became a headline international development agenda. Michael’s interest arose from his long association with small island developing states (SIDS). In the Address, we were thus invited to contemplate the potential to learn from such contexts at the ‘sharp end of climate change’. This potential was effectively illustrated by recent British Academy and USP-funded research collaboration between the University of the South Pacific, and the universities of Bristol and Nottingham, conducted between 2012 and 2016, with work continuing in the aftermath of the devastating Cyclone Winston (see Crossley, Koya Vaka’uta et al. 2017).

The address concluded with an in-depth analysis of implications and challenges for the future of the field of comparative and international education and, in its 20th anniversary year, for BAICE itself. I highlight just one of these: the challenge to apply ‘comparative and international education, and the policy transfer literature to new research priorities and contexts that have urgent human rights and global security implications.’ 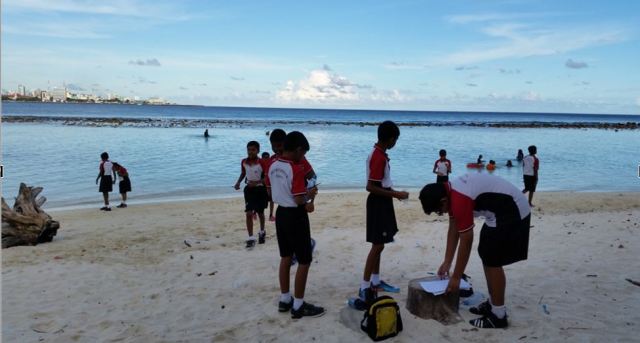 In her conference presentation, Aminath presented her PhD work, which is also concerned with a low-lying island context, vulnerable to climate change, and focuses on science education and curriculum development. From a curriculum and pedagogy development perspective, she presented findings from a scoping study, which explored how and whether upper primary school teachers are developing learners’ science process skills and addressing environmental education. She analysed learners’ work books and then used samples of their work to stimulate conversation with teachers. She found that teachers tended to focus on learning of content rather than the development of process skills (e.g. argumentation, observation). Hence, they taught about the environment rather than for the environment, meaning children were not engaged in action with respect to the environment or encouraged to analyse the social and political causes of environmental degradation in the Maldives. She concluded by showing how these findings informed the design of her main study for her PhD, in which she collaborated with a small group of primary science teachers to prepare curriculum materials that support the development of science process skills.

Angeline and Leon revisited their framework for conceptualizing education quality, to consider whether or how it could be extended to address the concerns of sustainability. Our original framework had drawn on theories of social justice. Hence, we turned to environmental justice literature. We found this highlighted the deeply social nature of environmental justice. Environmental injustices, such as contaminated water supply or polluted air, are inevitably experienced by communities. Further, communities subject to maldistribution and misrecognition (socioeconomic and sociocultural injustices) are most vulnerable to environmental injustices. This focuses attention on the role of education in expanding the ability of communities to reason about the environment (relevance), including through engaging with postcolonial critiques of scientific reasoning.

Sustainability also offers us the analogy of complex systems as a device for understanding and modeling education processes. Complex systems are dynamic; they self-organise into patterns that may rhyme but never repeat and that are made unpredictable by feedback loops. Complex systems are not isolated systems but co-evolve with other systems. We applied the analogy to understanding the relationship between classroom pedagogy, formal curricula and disciplinary subject knowledge, modelling these as nested co-evolving systems that change at very different rates. We concluded that making the curriculum inclusive and relevant involves creating coherence in processes of translation between knowledge production (research), the formal curriculum, and classroom pedagogy. Making them democratic involves opening up of these processes to active participation and knowledge co-production.

Faizulizami Osmin recently completed her PhD (above a picture captured right after the Viva). We celebrate her success and give a flavour of some of the excellent doctoral research carried out by CIRE members. We share the abstract for her dissertation.

This research investigates how teachers in Malaysia are experiencing recent changes in the direction of their Continuing Professional Development (CPD) which have shaped their sense of professionalism. The new CPD policy known as the Pelan Pembangunan Professionalisme Berterusan (PPPB), has been developed by the Ministry of Education but is profoundly influenced by the results of international student assessments. It is intended as an instrument to develop a teaching workforce that would turn Malaysia into a top performing nation in international assessments, such as (and particularly) Programme for International Student Assessment (PISA). Teachers, however, must understand the choices and decisions made by the Government and to accept, adapt or ignore the possibilities created for their professional development. The research in this study is guided by a review of international literature on educational change, the influences of globalisation on policy trends and practices as well as teacher professionalism.

The research adopted interpretivism as an epistemological stance and has two strands. The PPPB policy was investigated through review and interviews with policymakers involved in writing the policy. Teachers’ perspectives on the policy were collected through focus groups and individual face-to-face interviews. By exploring teachers’ perspectives on policy rhetoric, the Spectrum of CPD Model developed by Kennedy (2014) is employed to analyse and evaluate the policy. Indeed, this is especially useful in determining the level of synchronisation between the directions set in the policy and the policy’s intended outcomes. The findings suggested that teachers question and challenge the nature of the policy and its implementation which have adversely affected their mindset and attitude, in turn, impacting their involvement and commitment towards implementing the present system-wide reform.

Interview with Ariel Sanchez, author of “Knowledges of the War: Memory and Intergenerational Understandings of Conflict in Colombia” 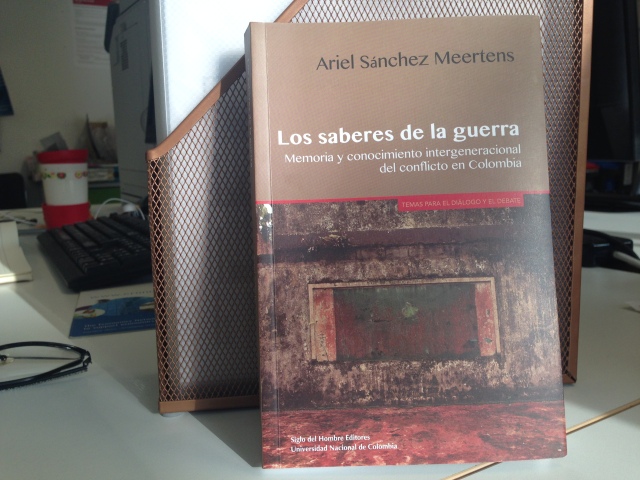 How education might contribute towards processes like peacebuilding? How education can promote knowledge and skills to build a culture of peace and non-violence? These questions highlight some of the challenges set by the sustainable development goals (SDGs) in times where the role of education in the promotion of a culture of peace and non-violence commands widespread global attention. Within that context, to know and understand some of the key features of the research undertaken by Ariel Sanchez in Colombia is particularly illuminative.

In his book “Los saberes de la guerra: Memoria y conocimiento intergeneracional del conflicto en Colombia” (Knowledges of the War: Memory and Intergenerational Understandings of Conflict in Colombia) (2017), Sanchez approaches the topic of peace building from two interesting and unexpected angles: the experience of conflict and the voices, reflections and memories of young people from different parts of Colombia. He engaged with students from private and public schools, girls, boys and mixed schools, urban and rural schools, mestizos and indigenous, who grew up within a context of an internal armed conflict, which lasted over 40 years. “Their voices were recorded through their responses of questionnaires (…) The questionnaire allowing anonymity to provide answers that I don’t think they would be able to give face to face”, explained Sanchez. Among the unexpected findings was that Pablo Escobar, leader of Medellin Cartel, the most violent organization involved in narco-trafficking, was mentioned by youngsters as one of their favourite Colombian historical figures.

-What do you think when you realise how alive is the image of Pablo Escobar?

-Escobar is a ghost you cannot get rid of. Maybe if it comes back once and again, instead of running away from that image, what we need to do is to incorporate it into the institutional educational dynamics, to avoid that image being reproduced exclusively by the media in the way the media does.

-Among the aims of the book is to present how young people in Colombia understand their country’s past, present and future. Why is it important to put the focus on young people?

-Peace education has been implemented without asking students or teachers how they understand peace. (The aim was) to listen to the new generations to hear how they perceive themselves and others and create a proper initial diagnosis before assuming what we have inherited supposedly as a conflict (…) Those claiming to work and talk about peace and peace education did not even bother to listen to the new generation before setting a whole framework and defining whatever peace should look like and whatever peace should be wanted by the new generation. Finally, is about acknowledging them also as producers of knowledge, historical agents.

-This is a project of recognition of a constant unending process of reviewing our history and the way meaning is produced around that history; it’s also a way of making a transformative action story from different angles, on the assumption that memory is actually a generative epistemic process. In this way, the construction of memory is understood as a constant process, without any ultimate version. Thus conceived, memory can be understood as a mechanism of reconciliation.